Protection of centipedes, Scolopendra and script 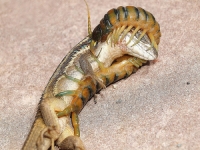 Company Bran Insect perform professional treatments against centipedes (Scolopendra, script, etc.). We offer both single treatments and subscription DDD contracts as required by RHI and NVS. Our activity is registered in the Ministry of Health.

What is a centipede, Scolopendra and script and are their bites dangerous for the people?

The most common is the ordinary house centipede (Scutigera coleoptrata), colloquially called earwig. In fact, it is millipede. Height reaches about 4 cm and has a brown- yellow body with very long, thin legs. Likes to dwell mainly ceilings, closets and places not visited very often by people.Centipedes are typical insectivorous predator during the day hiding in dark places - under objects or in crevices, and in the evening go to hunt and feed mostly spiders, flies or their larvae. Bite of them is very dangerous to humans.

Scolopendra, which are most prevalent in our country Scolopendra Cingulata and are found almost in all regions of Bulgaria. Reach a length of 25 cm, and the color of the body varies from brown to red, black, red or beige. Their number may reach 350. Unlike ordinary house centipede it is very aggressive, consume any less than its size insects and even lizards, small birds and others.
Attention:
Until now there has been one death of seven year old child in the Philippines who died 29 hours after the bite of this species Scolopendra. Please note that the bite can be extremely painful, as the biten place get often infected and inflamed. There may come allergic reaction accompanied with fever.

The script is smaller than the above millipedes and reaches only 2-3 cm in length, but also eat insects, worms and other invertebrates animals. Sometimes except under stones or near dry trees are found in human dwellings as well. Bite of it is not very dangerous to humans, since its jaws are smaller.

How does fighting them?

When ordering the destruction of Scolopendra, centipedes or script have to leave the premises for about 30 minutes, where there immobilized people and the weather permits, you can leave the windows open for about 10-15 minutes. Only children under 2 years old, or pregnant women should  not enter the premises about 2 hours after the spraying and before entering again should air for about 10 minutes.

When is the best time to spray against these millipedes?

The best time to spray against centipedes (earwig), Scolopendra and script is in the spring and summer or immediately by single specimens. Increasingly noticed mostly in homes and our coast in late autumn, when seeking refuge for the winter. Recommended are two successive treatments with an interval of 10-14 days and supportive treatments about every 6 months. Spraying a room of about 60-70 sq.m. is carried out for about 15-20 minutes. It's not necessary special training, but there should be normal hygiene and not scattered on the floor food for  animals.